My Quest for Spiritual Truth 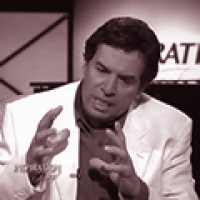 I was born in Haifa, Israel. After the partitioning of Palestine, Haifa became part of the newly created state of Israel. Being a proud Muslim, my father refused to live in Israel. So, I was the last child in the family to be born in Haifa. My dad put us all in a fishing boat, and we set out to our new destination – Cyprus. The family grew to a total of five boys and five girls. Cyprus is predominantly Christian, so it was natural for us kids to attend the Catholic elementary school, which I entered at the age of six.

In my senior year in high school, a lump began to appear on my right thigh and kept growing. It was later diagnosed as a malignant tumour. A doctor recommended immediate amputation of my leg to prevent the cancer from spreading to my vital organs and causing my death. Unexpectedly, the day before the operation my mother checked me out of the hospital, ignoring the doctor’s warning that I would be dead in a few weeks.

After checking me out of the hospital, my mom massaged a cup of oil into the tumour of my bedridden body several times a day. After two weeks of massaging with olive oil, the tumour had shrunk enough to allow me to bend my leg, and shortly after, it went away completely!

During my sophomore year in an American college, I started dating a Christian girl. Once, she invited me to attend a healing meeting with her. Being a devout Muslim, I resisted. Nevertheless, I liked the girl, so finally, I reluctantly went to the meeting with her. What I witnessed at that tent meeting changed my life. The minister had taken a young child with a deformed leg and placed him on the stage declaring that Jesus was going to heal him. He called out for any agnostics and skeptics present, especially students, to come on the stage to get a closer look. I did not hesitate and went up for a closer look.

The boy got healed supernaturally and I was deeply impacted by this miracle that I saw with my own eyes. I fell down on my knees and wept uncontrollably. It was spectacular! My Muslim mind could not process what had just taken place. I had no idea what a profound impact this would have on my life and where it would lead me.

I did not tell my family about the experience. But to myself I kept thinking that if Jesus healed that boy’s leg, that could only mean that Jesus was alive! When my family was finally told what had happened at the tent meeting, they tried to persuade me to pretend it never happened. But I simply could not do so. Ultimately, because of my profound reaction to this experience, my family disowned me.

With nowhere to go, I headed for Alabama where I knew an older couple that I had met at the tent meeting. I found the woman at a small country church. I started to explain who I was and what I was doing there. I wanted to tell the her what had happened at the tent. I wanted to say, “I am a Muslim – a Muslim thinking about Jesus all the time!”

I ended up staying with these people for about 40 days. It was towards the end of this stay that I had a most unexpected encounter…

Do you find yourself thinking about Jesus, wondering if there is any truth to the Christians' claim that He is the Son of God? Find out how Akef's quest for truth led him to the Living Truth.