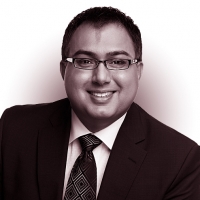 As a faithful Muslim born in Pakistan, I believed that Allah sent many prophets, the final one being Muhammad whom Muslims follow and to whom God gave the Qur’an, which was the only book from God that we believed to be unchanged. I was committed to studying it and loved reciting it. The Qur’an was my primary purpose in life. In our Muslim culture, our entire lives proceed from our faith. For a Muslim, faith is not a part of your life, it is your life. And so we were willing to die for our book, for the Qur’an. All this I came to know and believe without question.

My parents visited Niagara Falls on the American-Canadian border while on a three-month world tour on their honeymoon, and my mom fell in love with the place. Eventually they moved to Canada, which was when I was still a child. However, when I was seven years old my father died, and my mother moved us back to Pakistan in order to keep me from being absorbed into the North American culture. She wanted to be sure I grew up with a strong Muslim heritage.

Back in Pakistan I continued to be raised in a devout Sunni Muslim lifestyle. I was taught to recite the Qur’an and be a better Muslim submitted to Allah, the highest name of the 99 names of the one and only true God and creator of Heaven and earth.

At the age of 17, I left Pakistan and moved back to North America. I lived on my own and went to school in order to become a successful businessman and make my family proud. I got involved in business and came in contact with some Christians whom I believed were deceived because they lacked the truth of Islam. I considered the worship of Jesus blasphemy. I thought the Christians were exalting a mere man and making him to be equal with God. I also believed, as I was taught, that the Bible had been corrupted and manipulated by Christians. I believed the greatest sin a Muslim could ever commit was to confess that Jesus is the Son of God.

It was my passion though to help these deceived Christians, and if possible the Jews, to ultimately accept the Qur’an as the final book of Allah and become Muslims. A Christian associate invited me to church, and I remember saying to him, “I am a Muslim. I do not need to come to your church.”

At a business conference I was attending one time, an announcement was made that they were having a non-denominational service on Sunday morning in between sessions. The speaker arrived and he began to speak. Of all the things this businessman could have said, what he did say made me really angry. He started out by saying Jesus is the Son of God. There was no more blasphemous thing he could have said than that a son of God even exists. If I confessed this, it would send me straight to hell. Muslims don’t have an assurance of Heaven, but there is assurance of hell if you even think Jesus is the Son of God. How could God have a son? The Qur’an considers it blasphemy to even think such a thought. I wanted to confront and debate this speaker.

Little did I know that I would encounter the living God in one such meeting. What was God doing in a Christian meeting?

Read more about Faisal's life-changing encounter with God in the book.