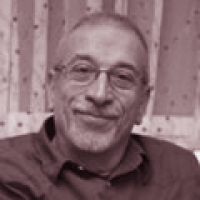 I was born and raised in Ankara, Turkey. My family was Muslim and my father taught me about Islamic religion. Even as a child I was really focused on my practice of Islam.  When I was in elementary school, my dad took me to a mosque to learn and study the Qur’an. During summer Qur’an courses were always held for the kids to learn how to practice Islam. They always kept the boys and girls in separate rooms. Every Friday my dad took me to midday prayer whenever I was at home. Going to a mosque on Fridays, which is a holy day for Islam, became a habit.

In 1969 I got married to someone who had very little religious experience in her life. As long as she was Turkish, my father didn’t ask whether she was practicing Muslim or not or say anything about my wife, because he was not a fanatical man in his beliefs.  My parents were open-minded people.  My wife and I had two children, first a boy and later a girl.

In 1980, we decided to move to the United States for business purposes. In America I tried never to miss my times of prayer in order to be a good Muslim. My father had told me when we were moving to the States, “Do not let your children lose their faith. Teach them everything.” That was his concern. Our daughter knew less about our faith than our son. He was different because he had some background while we were still living in Turkey. In the U.S., I continued teaching him and instructing him to practice our faith. I thought Islam was the best religion in the world. It was very important to me for my children to know our faith.

While my son was in college, his roommate began sharing the message of Jesus with him. One day he called his mom and told her that he chose to become a Christian. As I mentioned before, my wife had little to no Muslim background so she wasn’t against our son’s choice. When my son finally shared this with me, I got very upset and angry with Him. How could he do this to our family? How could he violate my faith? I thought his friends had brainwashed him. All his life, I had taught him to grow up as a Muslim man. Now he failed me.

Before I knew it, Jesus was affecting my family. One Christmas my wife and my daughter chose the Christian faith also. All this was a shock to me. I thought, Everybody is leaving me! That’s how I felt. Abandoned. My confusion was growing and I kept asking, “Why? Why?”

One day my son called me with more shocking news. He told me he was going to quit his career and life in America and go to Turkey to do God’s work! This idea made me even more upset. But I finally said OK because nothing was going to change his vision. He was not even really asking my permission. He had already made up his mind. My concern was what my relatives and my elderly mother were going to think. But I knew if I told him not to go, he wouldn’t listen anyway. He was that sure about God’s call on his life. How was I to argue with that?

I said goodbye to my son, who lived in Houston at the time. All of a sudden I began hearing all these things about Jesus. What was happening? I had always believed that Jesus was one of the prophets, but Muhammad was the last prophet and the Qur’an was the only holy book. That’s what I was told all my life. I didn’t know enough about Jesus to compare the Bible and the Qur’an.

Then one day I was watching sports on television. I was clicking the remote but it was not working. Suddenly, it jumped to another channel. I saw a man talking, and he pointed his finger at me through the television screen and said…

— Excerpt from the book.